Related Report: US Stops visas for some Af

Baltimore Ravens players, along with Ray Lewis (pictured second right), take a knee during the national anthem in London
NFL players staged a mass kneeling demonstration at Wembley Stadium in direct challenge to Donald Trump, who on Sunday renewed his calls for players who protest to be sacked.

Players from the Jacksonville Jaguars and the Baltimore Ravens linked arms and fell to their knees for the US national anthem – before standing in respect for God Save the Queen immediately after.

The protest took place on Sunday before an NFL International Series match.

Various players from across the league have knelt or raised their fists during The Star-Spangled Banner since the start of last season, including high-profile figures such as Colin Kaepernick, Michael Bennett and Marshawn Lynch.

The gesture is meant as a protest against police brutality against black people and racial inequality.

But the US president has blasted the practise in a bizarre weekend-long rant that began on Friday night with a speech in Texas and continued through Saturday and Sunday morning in a series of tweets.

Mr Trump said at Friday night’s rally in Texas that NFL team owners should “fire” players who make protests during the national anthem.

He was referring to a controversial string of protests started by player Colin Kaepernick last year when he sat or kneeled during the anthem to highlight the treatment of black Americans.

Players on both teams and Jaguars owner Shad Khan, who were not kneeling, remained locked arm-in-arm throughout the playing of the national anthem and ‘God Save The Queen’. 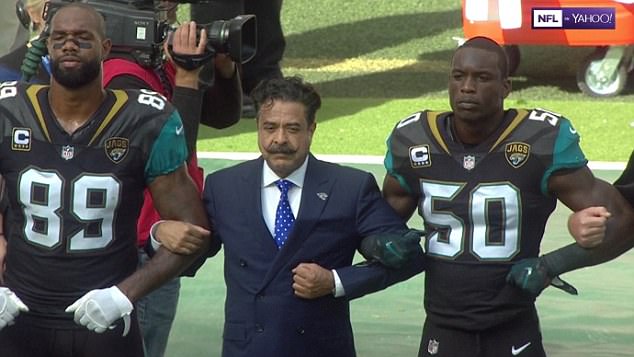 “Some owner’s going to do that. He’s going to say, ‘That guy who disrespects our flag, he’s fired’. And that owner, they don’t know it – they’re friends of mine, many of them – they’ll be the most popular person for a week in this country.” 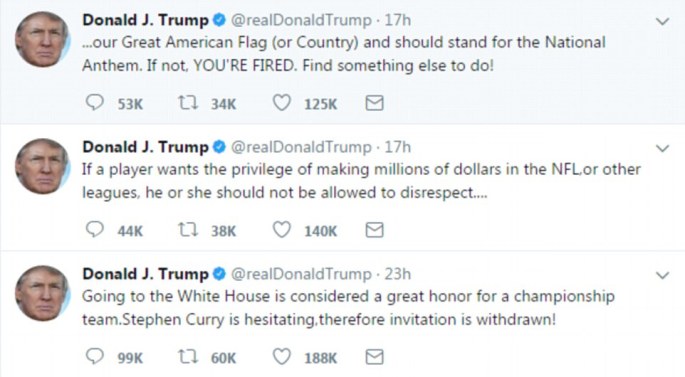 The comments were followed up in a series of Saturday tweets – and Mr Trump was still going on Sunday morning, posting: “If NFL fans refuse to go to games until players stop disrespecting our Flag & Country, you will see change take place fast. Fire or suspend!”

He then added: “NFL attendance and ratings are WAY DOWN. Boring games yes, but many stay away because they love our country. League should back U.S.”

Contrary to The Twitting presidents claim, many Thousands of NFL fans make their way to Wembley for the match between Jacksonville Jaguars and Baltimore Ravens Read

This president is waging war with everybody, white supremacy springing up right, left and centre because of his support, he is talking war with Korea and changing every policy that makes life better for ordinary Americans on the street. (DACA issue is there, Mexico and the great WALL which we have seen is there) 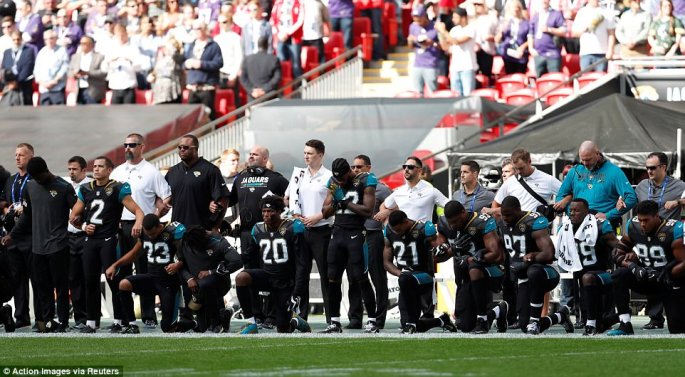 The NFL Players’ Association said Trump had crossed a line by effectively telling players to just ‘shut up and play’.

Association president Eric Winston said Trump’s comments were ‘a slap in the face to the civil rights heroes of the past and present’.

‘We’re not happy about what’s going on but at the same time, whatever the message is, we’re going to send it together.’

Khan’s show of unity was praised by quarterback Blake Bortles, who threw for four touchdowns in a one-sided Wembley win.

The Jaguars tweeted a photo of Khan standing, arm in arm with Lewis and Smith, with the caption ‘Unity’.

‘I think it’s incredible. Anytime you get a guy who is running the whole thing. When he comes out and leads from the front I think it speaks volumes. I think it’s pretty impressive of him and his character,’ Bortles said.

Related Report: US Stops visas for some African and Asian

Nations for refusing to take back deported citizens

Head coach Doug Marrone concurred: ‘We got together and the one thing we wanted to make sure that we supported each other and went out as a team. Shad’s come out with a statement and we support that.’

‘It’s an unusual situation. There’s no book that tells you how to do it. The way we handled it, there was a lot of communication and a lot of talking. And we’re going to be better off for it.’

The Match however was a straight one sided win for The Jacksonville Jaguars who were united in their support of owner Shahid Khan after one of their biggest victories in franchise history.

Stevie Wonder has showed his solidarity with NFL stars, dropping to his knees at the Global Citizens Festival in New York’s Central Park on Saturday night. 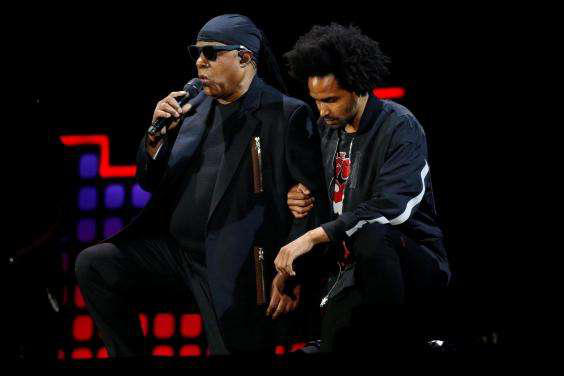 Mr Wonder told the music festival: “Whenever you need to interrupt hate, stand down bigotry, condemn sexism and find love for all of our global brothers and sisters every day.

“Tonight, I’m taking a knee for America. But not just one knee, I’m taking both knees, both knees in prayer for our planet, our future, our leaders of the world and our globe – amen.”

With the help of his son Kwame Morris, the 67-year-old pop star dropped to one knee, and then the other in front of the cheering crowd.