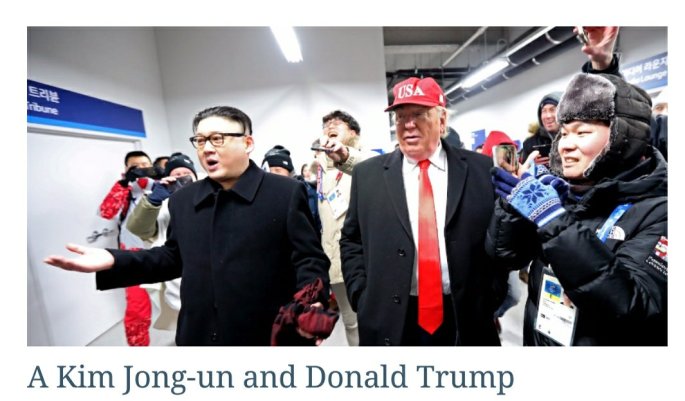 Leaders from around the world gathered this Friday for the Winter Olympics Opening Ceremony in PyeongChang, South Korea, including U.S. Vice President Mike Pence and Japanese Prime Minister Shinzo Abe.

U.S. President Donald Trump and Supreme Leader of North Korea Kim Jong Un were not present. Well until these guys showed up….

These guys are just some side fun and great laugh at the opening ceremony to have impersonated the pair of nation leaders who have been trading threats of nuclear war for the past year. The guys were eventually kicked out of the venue for whatever reason.

The over compensatingly long red tie to the haircut makes it ridiculous but they got the attention they abviuosly wanted and it was fun.

It was a perfect opening ceremony gesture from the pair and they surely got the attention of prominent media outlets who saw them and shared their pictures and excitement on social media.

It was attention that evidently saw them got kicked out of the festivities.

A day like this might never come in real to see them big headed ego centric rulers under the same roof, but it was nice to see what these guys are about.