As women took on traditional male roles in munition factories, farms and forests; they also took on the role of footballers. During the war, football was chosen by the workforce as their preferred sport and leisure activity, creating a grassroots wave of enthusiasm for the women’s game.

The women took the mantle of the sport when most of the male footballers have gone to war. Various women football team were created and used football games to entertain the people, to cast their mind and attention away from missing and wondering about their loved ones in war front. A remarkable gesture and adventure from the women of this country. Women football therefore is nearly as old as the male football in the country, it might not have taken full professional effect until late but was sure there during the war and did as much remarkable job too.

The Lancashire United Transport Company is believed to have had a women’s football team as early as 1915 but the most famous team, Dick Kerr Ladies of Preston, only began to play seriously in 1916.

Women’s teams from munitions factories across the country played football to boost morale on the home front. The teams became recognised for their charitable drives by playing to raise money for the war time effort.

After their shifts, women staged their own football matches, often in front of huge crowds of thousands of people and kept the flame of football burning during our country’s darkest hour. Large crowds were drawn to watch women’s football locally and even went as far as for international competitions or ties with France, Belgium and other European teams.

The crowd always came out in large numbers to watch the female team at the time. they certainly did a good job of keeping the beautiful game alive while the men were away at war.

Today, Female football is in full swing in the country thanks to the good women initiative during the war.

While today there are debates about whether female players deserve the same pay and adoration as their male counterparts, this was not an issue in 19th century Britain. It was the main form of entertainment for both male and female in the society during the war when all men have gone to war front.

During and shortly after the war, women’s football was so popular it drew in bigger crowds than men’s matches with 25,000 travelling to France to watch England play their first international game. 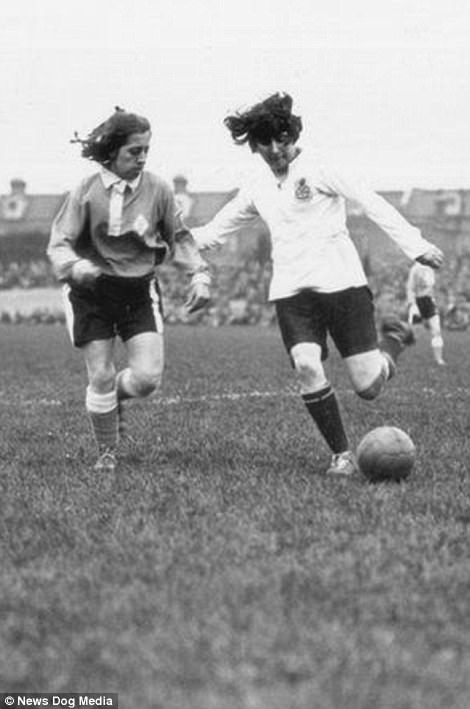 Images dating back to 1890s show proud women on the pitch in front of thousands of fans – even donning shorts in a notoriously prude Victorian era.

But the popularity came to a sudden halt when jealous officials from the FA (Football Association) launched a propaganda campaign saying the beautiful game was ‘unsuitable’ for females. ( cant imagine anything more beautiful though)

Players and fans were outraged and the then-captain of the Dick Kerr Ladies’ team Alice Kell hoped to defy the legislation, exclaiming: ‘We play for the love and we are determined to carry on’.

But sadly the campaign marked the start of a decline in the game and changed the course of the women’s game forever.

The ban destroyed the popularity and the momentum created before and during the war, today female football is getting back up and its a matter of time for them to be back to their original status in the beautiful game. The ban wasn’t lifted until 1971, which was why  the female football today, is country miles behind their male counterparts.

Adorable collection of female footballers pictures before, during and after the war before the infamous FA BAN.